Dr. Rick Rigsby to Plexus associates: Selfishness is dangerous, growth is essential, change is up to you 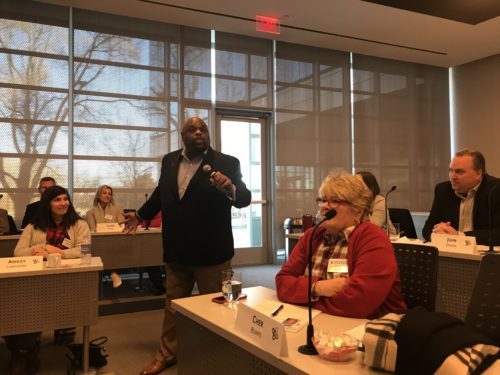 Selflessness is a virtue -- and a necessity for a business to move foward.
And if a business isn't growing, forget about it.

These were among the lessons from Dr. Rick Rigsby during Thursday's keynote address at the 2018 Plexus Team Building Event.

The best-selling author of "Lessons From a Third Grade Dropout," Rigsby imparted wisdom learned from his late father, whose formal schooling ended not long after kindergarden but whose committment to education never stopped. Among his father's lessons: Be a servant to others.

"Ego is the anesthesia that deadens the pain of stupidity," said Rigsby, a former professor and TV sports anchor turned motivational speaker.

To begin his talk, Rigsby spoke of the risks people and businesses face when they do not keep evolving.

Rigsby also drew a link between entropy and the pursuit of adulation.

"We love hearing the accolades from others. Guess that that invites?" Rigsby said.

Rigsby also called on Plexus staff and other assembled guests at the American Society of Anesthesiologists to think and act strategically.

"Great people are thinking in muitiple dimentions," he said. "They’re not just showing up for a paycheck and some benefits."

Rigsby also took aim at the idea that businesspeople are just too busy to change their habits.

"The issue is not time. The issue is our management, or lack thereof, of time," Rigsby said.

Then, in his closing remarks, Rigsby told Plexus associates to look inside themselves. Company management, he said, shouldn't be expected to "raise your expectations for you."

Said Rigsby: "You raise them yourself."

For more information on Dr. Rick Rigsby, including booking information, please visit his website, RickRigsby.com. And be sure to check out the 2017 speech he delivered to California State University Maritime University, which has been viewed more than 130 million times.

Newer Post While a stormy 2017 was expensive for insurers, it could have been worse
Older Post Plexus Financial Services selected as a Top Defined Contribution Advisor Team for 2017